PCB should find new talent to improve the performance of the team said Shoaib Akhter.

Shoaib Akhter is the famous international cricketer of pakistan. He is famously known as the Rawalpindi express. He has the record to bowl the fastest bowl in the history of the world cricket. He was the sign of a fear for the batsman in his golden days. He often seems to make bold statements regarding cricket.

This time around he came up with the idea that PCB should find new talent for the betterment of the game with in the country. He has a huge respect for the ex world cup winning captain imran who is the current prime minister of pakistan.

Shoaib Akhtar was born on 13 August 1975 in Rawalpindi.  During his school days Shoaib used to run the 100-meter races. He was a very good sprinter. That’s how he got his pace doing a fast 35 meter run-up. Before becoming a cricketer Shoaib was a wild, irresponsible and reckless lad who always got into trouble, fighting in streets or running after girls.

In his words, “ I didn’t have to work so I would just roam around on my Kawasaki 750 motorbike. I was totally carefree. I wasn’t a very nice guy, infact I was nasty and bad. I was always getting into fights usually over women. I was a real street fighter. People didn’t like me at all.” Shoaib has a nine inch scar across his chest and a lot more wounds down his legs.

He further added, “I even carried a gun though for my own safety. I would never shoot anyone, but would fire in the air in order to scare the enemies. My mother was always worried about me. At times she slapped me and said, “I am not happy with you. You better be a good man.” And see her wish has come true. Now my mother is very proud of me and wishes me luck before every Match.”

A symbol of Fear:

Imagine a bowler running in those extra yards all the way from the boundary, with fire in his eyes and coming at you at a speed of nearly 100 miles. Forget about facing him, only the thoughts of it would bring shivers down your spine. Such was the impact of this super quick speedster called 'Shoaib Akhtar' on the psyche of batsmen.

Many legends of the previous generation have been at its receiving end. Be it Brian Lara, be it Sachin Tendulkar, be it Ricky Ponting or be it Sourav Ganguly. You name him and Shoaib had given that batsman a taste of his medicine. He was an amalgamation of raw pace, lethal bouncers and nightmares. There was hardly anyone who got away with it. 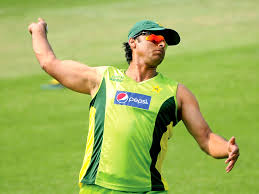 Akhtar’s debut was to have come against India in the 1996 Sahara Cup played in Toronto. However, he was sent home due to indiscipline and poor attitude. He was first picked to play on his home ground in Rawalpindi during the 2nd Test of the West Indies 1997/98 tour of Pakistan. His debut was quiet and modest as he managed to pick only 2 wickets.

He first proved himself during Pakistan's tour to South Africa in 1998. Having come into the match with a knee injury, he bowled at pace to take 5/43 and help Pakistan win in South Africa for the first time. Akhtar's run of impressive performances started in 1999, during a pre-World Cup series against India, just a couple of years after his debut.

His most significant performance was in India in 1999 when he captured eight wickets in the Asian Test championship match at Calcutta including that of Sachin Tendulkar, whom he dismissed in the first ball that he ever bowled to him. He achieved success in the ICC Cricket World Cup 1999 and the series played against Australia in 2002. 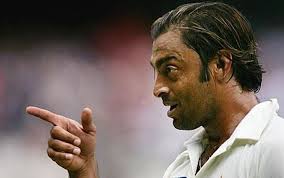 From getting banned for the use of performance enhancing drugs, being accused of ball tampering, to having rifts with his team mates and PCB, he had done it all. The guts to accept all that and face its consequences was the reason why he was such a courageous heart. He never compromised on his pace in order to have an elongated career or for the matter of fact longevity.

In a test series against New Zealand in 2004, he left the field citing injuries leading to suspicion by the captain Inzamam ul Haq and the Pakistan Cricket Board regarding his commitment to the team. After a poor performance in the 2003 Cricket World Cup, he got involved in a verbal conflict with former Pakistan captain and fast bowler Waqar Younis. He has also been convicted of ball tampering.

On 16 October 2006 Akhtar was suspended by the Pakistan Cricket Board, along with Mohammed Asif after they tested positive for a performance enhancing drug, nandrolone. This is regarded as one of the worst controversies in the history of world cricket.