New Delhi: Mangiyama Devi, a 74-year-old woman from the Indian state of Andhra Pradesh, has given birth to two twin daughters through IVF, a test tube-free technique, and has thus become the oldest mother to be a woman. Earlier in 2016, another Indian woman, Diljinder Kaur, set a world record by giving birth to a son at the age of 72 through a test tube baby technique.

Mingiyama Devi was married to Sitaram Rajarao in 1962, but the couple remained childless, on which Mingiyama and her husband had to be ridiculed from all sides; they were even awarded the titles like Manhoos and "Shapat". ۔ They underwent all kinds of treatment but there was no rumor. Even so, her desire to become a mother in Mingiyama did not diminish, even last year when she saw a 55-year-old neighbor become mother through IVF. On this he also decided to visit a fertility clinic to fulfill his desire to become a mother.

Doctors first explained to them that they are too old and that getting pregnant at this age can be a risk, but they should stick to their stubbornness. Eventually, doctors surrendered, and a medical examination was initiated before the pregnancy was finalized. Fortunately they had neither diabetes nor blood pressure. Surprisingly, they were successfully terminated in their first attempt at IVF techniques. 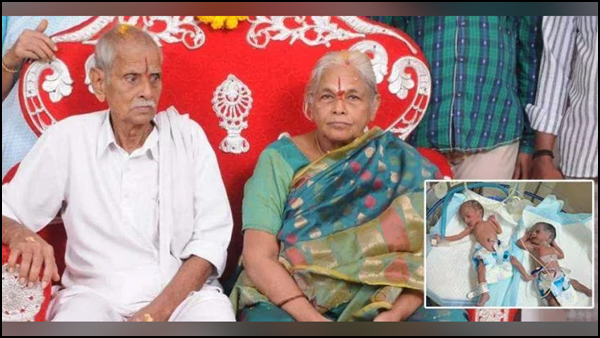 After that, doctors kept her in check at every step, even the maternity phase was completed well and a few days ago the birth of two healthy twin daughters was welcomed. Doctors say mothers and babies are healthy and have no problems. However, only for caution and observation will they have to stay in the clinic for some days.

Although most people have praised Mingyama's sentiment over the news, some say the future of children born at such a young age will be alarming. Will Mingiyama and her husband survive until these girls are young? These and many other things are being talked about.

Despite all these objections, Mingiyama is happy to have daughters with her, and is determined to take care of them.